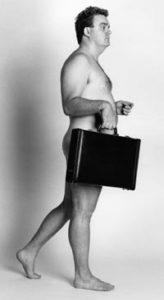 Dan Redican’s lack of charisma, wit, and marketable skills drove him into show business. Dan was Executive Producer of MTV’s Lyricist Lounge, Supervising Producer for The Kids in The Hall, Producer for MTV’s Jenny McCarthy Show, and has written for Global’s Blackfly, TBS’s Chimp Channel and The USA Network’s War Next Door.

Dan has performed across Canada in his many one man shows. His most recent effort, Stop Being Stupid, has been getting rave reviews. The Toronto Star called the show, “..quite simply a laugh-out-loud tour de farce…” while Now Magazine described his performance as “…gut bustingly funny.”

Dan is currently story-editing, writing and starring in the Comedy Network’s hit show, Puppets Who Kill, a series that has won a Canadian Comedy Award, multiple Geminis, and a prestigious Rose D’or at the Montreux Television Festival. Dan is married and is incredibly nervous that his two children are much more talented than he is.